3 Ways to Attract Donors and Keep Them Donating

Donor acquisition is undoubtedly one of the most important, and difficult, aspects of managing a non-profit organization. There is no single reason that gets people giving, and no unique sweet spot that’ll make donors give more. Learning how to attract donors, and keep them donating is more experiment than science, though in recent years there has been a lot of research into what motivates people to give and how to get large donations on a regular basis.
While some donors will respond to emotional or inspirational stories, recent research suggests that public recognition may have a greater effect on donor acquisition, and retention. Here are some tips that can help you on your fundraising journey.

1. Let the World Know about Big-Name Donors and Celebrity Endorsement

If you have a big-name donor, organization or foundation supporting your work, let everyone know about it. Experiments conducted by Yale University showed that naming big-donors, celebrity endorsements and other well-known support can increase the chance of an individual donating by up to 22%. The reason: It’s increasingly difficult for individuals to choose a charity amid the hundreds of thousands on offer. A household name increases the chance that your charity will stand out, and acts as a seal of approval.

2. Reward Your Donors with Recognition 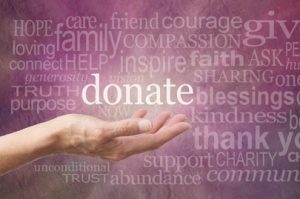 Everyone wants to get a little praise and recognition for the work they do, whether by active hands-on assistance or by donating a significant sum of money to help a charity. The promise of public acknowledgement goes a long way in attracting potential donors, especially big-name donors. Never under-estimate the power of public recognition and use it when asking for donations. Joan Flanagan, who is considered a pioneer of grassroots fundraising, offers a simple philosophy: “All the knowledge about fundraising can be summed up in ten words: Ask ‘em, thank ‘em, ask ‘em again, thank ‘em again.”

3. Get Up Close and Personal

There’s a lot to be said for the personal approach. Asking for support and donations in person will always be more effective than any other way of advertising. This is particularly important when trying to get donors to keep giving. Set up face to face meetings with past donors, pay attention to what they’re saying. Ask them about their experience and why your charity is meaningful to them. The traditional thank you letter is an essential starting point, but the best way to keep donations rolling in is to personally recognize and reach out to donors.

Bonus Tip – Do the Research, Show You Care

A very small percentage of your fundraising effort will actually be spent on asking, the rest is preparing for ‘the ask’ with research into prospective benefactors, and how you treat your donors after their first donation. This type of effort should not only be limited to big-name donors. Making an effort to personalize the relationship you have with small and medium supporters is imperative.
In a world that is increasingly driven by fleeting soundbites, six-second videos and click bait headlines, taking the time to personally and actively engage donors is the best way to attract, retain and ensure that your charity remains successful and effective.