Willian Redington Hewlett (Bill Hewlett) was born on in 1913 in Ann Arbor, Michigan. His father was a physician on the faculty at the University of Michigan’s medical school before moving the family to California in 1916. 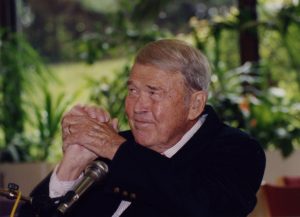 Bill Hewlett attended Stanford University where he graduated with a Bachelor’s degree in 1934, followed by a Master’s degree in electrical engineering from MIT in 1936 and a further degree in electrical engineering from Stanford in 1939. While at Stanford, Bill was tutored by Fred Turman, one of Stanford’s preeminent professors and who is considered one of the biggest influencers of the development of Silicon Valley. Terman encouraged Bill and fellow student David Packard to form the Hewlett-Packard Company in 1939, out of Packard’s garage in Palo Alto. Bill served in the army during the war and his entire business career was devoted to building the Hewlett-Packard Corporation.

The company’s first big order came from Disney Studios who ordered eight audio oscillators that were designed by Bill Hewlett for use on the production of the 1940 animated film, Fantasia. By 1947, the company was incorporated and subsequently publicly listed in 1957. Hewlett Packard became well-known for its company culture and ethos, ‘The HP Way’ which both Bill Hewlett and David Packard based the entire company structure upon. The ‘HP Way’ was a culture than prized relationships over making money and the development of employees over profits and was one of the first companies in the United States to introduce profit-sharing, employee stock ownership, flexible work hours, and health insurance.
Hewlett was president of HP from 1964 until 1977 and served as CEO of the company between 1968 and 1978. He remained as chairman of the HP executive committee until 1983 and vice-chair of the board until 1987. In 1985, Hewlett was conferred with the Presidential Medal of Science by president Ronald Reagan.
He also served as a Director for Hexcel Products between 1956 and 1964 and as a director of Chase Manhattan Bank between 1969 and 1980. In 1966 Bill Hewlett was appointed to the Board of Directors of Chrysler Corporation, a position he held until 1983. A private, unassuming man, Bill Hewlett was famously remembered by Steve Jobs who reached out to Hewlett at age 12 to request parts for a frequency counter he was building. According to Jobs, Bill Hewlett was so impressed he offered him a summer job assembling frequency counters. Jobs noted that HP was one of a handful of companies that were built to last, not just to make money.

Bill Hewlett approached his philanthropic endeavors in much the same that he did his business. Quietly leading the way, unassumingly creating a legacy for generations to come. In 1966, together with his wife Flora Lamson Hewlett, he founded the William and Flora Hewlett Foundation which has gone on to become one of the largest private foundation in the United States. Apart from the work done by the foundation, Hewlett gave generously to several universities including Stanford as well as to museums and other non-profit community-based organizations.